In 1996 the Congress amended the Act involving time frames for dispute investigation and resolution, and increasing restrictions on reinserting those disputed, deleted items. The 1996 Amendments also increased the obligations of employers, such as notifying employees their credit reports will be obtained, and imposing new duties related to dispute resolution and accuracy by CRA furnishers of information.
By Simpluris Research Team - 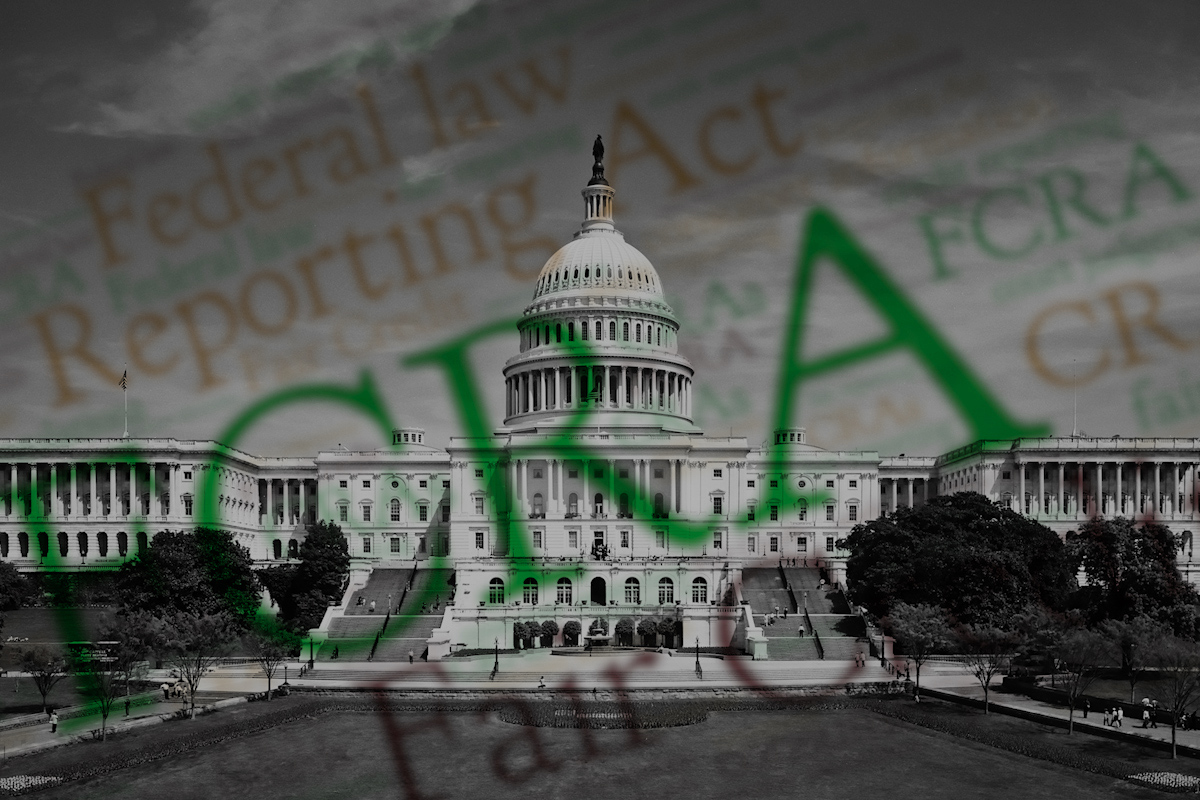 Who is entitled to your credit scores and information, and how can they legally use it? Back in 1970 the U.S. Congress passed the Fair Credit Reporting Act (“FCRA”) to limit the recipients of consumer credit information to prevent abuse and misuse of this material routinely used by employers, credit grantors, insurance companies, landlords and others to determining whether financial arrangements should be instituted, as well as to increase the accuracy of credit reporting systems. The Act also requires consumer reporting agencies (CRAs) to create procedures to guarantee accurate financial reports, prompt disclosure of credit reports to consumers, and a method to investigate disputes.

In 1996 the Congress amended the Act involving time frames for dispute investigation and resolution, and increasing restrictions on reinserting disputed or deleted items. The 1996 Amendments also increased the obligations of employers, such as notifying employees their credit reports will be obtained, and imposing new duties related to dispute resolution and accuracy by CRA furnishers of information. Extra damage provisions were added for liability for willful and negligent noncompliance, including attorney fees. If the violation was willful the consumer can recover statutory damages ranging from $100 up to $1,000 per violation and punitive damages.

Standing: As with any lawsuit, putative class action plaintiffs are required to prove an actual injury to themselves to possess Article III standing to sue. The U.S. Supreme Court has found that a lawsuit’s allegation of a statutes’ “bare procedural violation” does not automatically satisfy the injury-in-fact requirement, but that plaintiffs must allege and demonstrate the injury affected the plaintiff in a personal and individual way, or more succinctly, is “particularized.”

In Spokeo, Inc. v. Robins, a FRCA class action case, Spokeo operated a ‘people search engine’ web site that included in depth consumer reports. Plaintiff Robins complained that Spokeo’s report over inflated his background profile, causing him to suffer a long stretch of unemployment. Although the trial court dismissed the case, the Ninth Circuit Court of Appeals reversed, finding that sufficient injury had been alleged because FCRA addresses individual, and not collective rights. Robins was suing for himself. But then the U.S. Supreme Court vacated the Ninth Circuit’s ruling that ‘bare procedural violations’ are inadequate to allege harm and thus invoke standing. The high court found plaintiff’s injury to be ‘particularized’, but found the Ninth Circuit did not properly consider whether the injury was ‘concrete’, ---whether plaintiff adequately alleged an injury in fact. On remand, the Ninth Circuit then found sufficient allegations of concrete harm, finding that even publishing flattering untruths could harm those seeking employment.

Spokeo again petitioned the Supreme Court, but their writ of certiorari was denied, leaving the Ninth Circuit’s ultimate decision in place. Hence, Spokeo, Inc. v. Robins is where the present tension in the law is considered by many to rest. For more information regarding ‘standing to sue’ click the link Data Breaches, Uncertainty of Standing to Sue, and Class Actions.

Commonality/Typicality: Commonality encompasses whether the same law and facts exist for all class members. Typicality then centers on the class action representatives’ claims --- do they arise from the event, practice, course of defendant’s conduct that are the same as the class members claims. For an overview of these issues --- click link to Class Action 101 and scroll down to the Numerosity, Commonality, Typicality and Adequacy of Representation section. In the FCRA context, the question must be asked, do defendants data collection or furnishing methods vary? If so, it can be very useful to a FRCA class action defendant.

In Soutter v. Equifax Info. Servs., LLC the Fourth Circuit Court of Appeals found that since the defendant’s data collection methods changed over time “the court would need to determine the source of each piece of adverse information in a consumer’s report and then evaluate the quality of that source. This will necessarily entail individualized inquiry for many reports, even if some of the record sources may be common to many potential class members and thus susceptible to classwide proof.” This decision followed the U.S. Supreme Court’s ruling in Wal-Mart v. Dukes that sought ‘glue’ to hold a proposed putative class together that could resolve commonality issues in ‘one stroke’. For an in-depth discussion, click link to Glue and ‘One Stroke’- The U.S. Supreme Court Raises Class Action Commonality Standards. Hence, defendants often challenge FCRA class action certification motions on the basis that statutory damages ($100 to $1000) will inevitably vary for each consumer. Courts are loath to certify these cases as class claims cannot be resolved with a single ‘stroke’ as there is no ‘glue’ holding the commonality of these claims together.

These defenses may not extinguish a class action but can certainly limit the size of the class.

Superiority: Federal Rule of Civil Procedure 23(b)(3) requires that a class action be “superior to other available methods for fairly and efficiently adjudicating the controversy.” Hence, a court must compare whether a class action is an efficient and effective expenditure of judicial time and energy, and the possibility of prejudice to putative class member not before the court. Defendants can argue that individual FCRA suits are more practical than large class actions as Congress mandated a range of statutory damages that varies per claim, and authorized attorney fees and punitive damages.Plaintiffs can still prevail in FCRA class actions.

Goodjobsfirst.org, a non-profit organization’s Corporate Research Project, reported that their study of 146 successful FCRA class actions filed in the last ten years pursuant to the FRCA’s employment provisions netted $174 million in class action settlements. The largest settlement was in Ryals v. Hireright Solutions, Inc., several cases consolidated in the Eastern District of Virginia’s federal court. These cases alleged that Hireright failed to comply with the notification, ensuring maximum accuracy, and providing information upon request procedures of consumer reports. Five different defined classes comprised of 1.5 million members were paid from a settlement fund of $28,375,000.00. Less than 300 of the class members objected to the settlement.

A more representative example is Soutter v. Equifax Information Services LLC, another case arising in the Eastern District of Virginia’s federal court, about 90,000 consumers credit reports had judgments marked as open for a month or more after they had been dismissed, vacated or paid. In the settlement, Equifax agreed to remove judgments for all consumers in Virginia, not just the resolved claims, along with the fairly standard proviso of four years of free credit monitoring and cash of about $180 per class member claimant. Court documents state that “considering the relief obtained here — the complete removal of all public record Virginia judgment information — this settlement is, in a word, unprecedented. Plaintiffs’ counsel carefully monitor FCRA classes filed and settled across the country and can represent to the court without qualification that such a sweeping landscape change has never been seen before in the history of FCRA class litigation.”

Equifax agreed to pay $3 million into a class action cash fund, and not oppose $3,725,000 in requested attorney fees.

In an interesting development for plaintiffs, the Ninth Circuit Court of Appeal ruled in Syed v. M-I that an employer acted willfully in violation of the FCRA when it included a liability waiver in its FCRA disclosure. Hence, if a plaintiff can demonstrate that an employer, or other defendant, acted ‘willfully’ they do not have to prove ‘actual damages’ under FCRA. The Ninth Circuit found that disclosures must ‘consist solely’ of, … well, ‘disclosures’. Hence, including a ‘release’ within the ‘disclosures’ is a willful violation as it has nothing to do with a ‘disclosure’. In Gilberg v. Cal. Check Cashing Stores the Ninth Circuit extended the Syed ruling that even advising job applicants of their legal rights under state fair credit reporting laws was also a ‘willful’ violation of FCRA. While defendants cry that this analysis is ‘hyper technical’, the court found that these advisals need not be contained in the same document as the statutory FCRA disclosure form. By adding additional information within the disclosure form only confuses the ‘reasonable reader’ with extraneous information.

FCRA class actions can be considered an imperfect grazing ground for class action litigants, with numerous defenses within the entire statutory landscape, but with usually such a large potential putative class action membership a significant financial threat to both credit agencies and employers alike.