Glue and 'One Stroke' 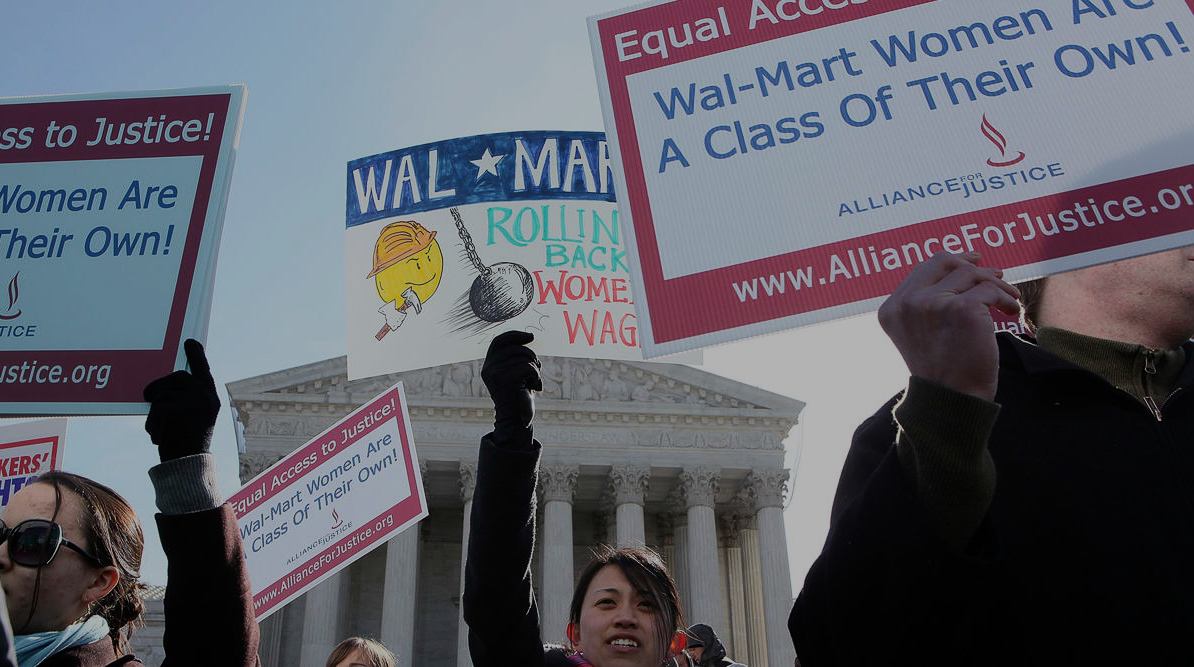 Are we already feeling a class action commonality issue? Wal-Mart’s company structure delegates pay and promotion decisions to the discretion of local managers, instead of the main office, top-down approach. These regional managers are permitted to use independent judgment in the candidate management training selection process and promotions. '

Betty Dukes was a Walmart cashier later promoted to a customer service manager position. In June 2001 she and other proposed class actions representatives alleged in a class action lawsuit that the company’s nationwide policies resulted in lower pay for women than men in comparable positions and they had to wait longer for management promotions than men; Walmart provided local managers undue discretion when making pay and promotion decisions; women were underpaid and disproportionately denied promotions, and a strong and uniform corporate culture permitting gender stereotyping existed. Contentions that Walmart had an express company-wide policy prohibiting advancement for women were absent from the complaint.

In June 2004, the federal district court in San Francisco granted plaintiff’s class certification, in part, for “all women employed at any Wal-Mart retail store since December 26, 1998, who had been or may have been subjected to Wal-Mart's allegedly illegal pay and promotion practices.” Plaintiffs presented three forms of proof to meet the commonality requirement:

Walmart appealed to the Ninth Circuit. In February 2007, a three-judge panel affirmed. Walmart filed for a rehearing and a rehearing en banc, meaning many judges, not just three, should hear the case because of its complicated nature and importance. But in December 2007, the three-judge Ninth Circuit panel withdrew its initial opinion, issuing a subsequent, superseding opinion continuing to permit class certification, thus dismissing Walmart’s rehearing original petition as moot, contending the revised opinion addressed the company’s concerns particularly in the area of expert testimony. Walmart filed another en banc hearing petition of the newest Ninth Circuit opinion, which was granted in February 2009 and heard the following month. Then in April 2010, the en banc court affirmed the district court’s class certification order on a slim 6-5 vote.

In June 2011, the Supreme Court unanimously ruled that because of the variability of plaintiff’s circumstances, they lacked commonality to proceed as a class as presently comprised of back pay issues. The court also voted 5-4 that the proposed class lacked commonality to proceed with a class-action suit on any remaining issues, such as injunctive relief. Justice Scalia’s opinion reasoned that plaintiffs’ contention Walmart had created a company-wide culture institutionalized bias against female workers was beyond proof and plaintiffs did not identify a common approach in exercising discretion that pervaded Walmart as a company. The High Court found that commonality was not met because a core inquiry of a Title VII discrimination claim is the reason for the employment decision. The critical and often quoted passages of the opinion regarding commonality state there:

“must be of such a nature that it is capable of classwide resolution—which means that determination of its truth or falsity will resolve an issue that is central to the validity of each one of the claims in one stroke.

Without some glue holding the alleged reasons for all those decisions together, it will be impossible to say that examination of all the class members’ claims for relief will produce a common answer to the crucial question why was I disfavored.” (emphasis in original)

The court found that the in the face of the company’s national policy of non-discrimination and decentralization of its employment decisions, the plaintiffs’ use of statistical evidence was not sufficient to establish commonality. “In a company of Wal-Mart’s size and geographical scope, it is quite unbelievable that all managers would exercise their discretion in a common way without some common direction.” However, plaintiffs provided no evidence to support this critical fact, with the court finding they had “little in common but their sex and this lawsuit.

Dissenting from the Rule 23(a) portion of the ruling dealing with injunctions (as opposed to back pay issues), Justice Ruth Bader Ginsburg and three other justices found that plaintiff’s evidence had introduced sufficient to allow the case to go forward, suggesting that “gender bias suffused Wal-Mart’s company culture.” The dissenters felt that the differences women experienced in promotions and pay were adequate evidence of bias and not the result of “neutral variables.”

What Now? Strategies in Light of Wal-Mart v. Dukes

A survey of post-Duke analysis finds recommendations that a plaintiff’s attorney must now present class definitions that are capable of a classwide resolution of all class members’ claims, to satisfy Justice Scalia’s ‘glue’ and ‘one stroke’ requirements without the need for individualized review. As a practical matter, Dukes demonstrated the High Court’s new approach of reviewing a claim’s merits to determine eligibility for class-action treatment affecting all cases, not just in the employment discrimination arena. Hence, plaintiffs’ counsel must demonstrate that the putative plaintiff classes’ injury was the result of a company-wide policy.

The Dukes court found that statistical evidence alone was inadequate to demonstrate commonality. A leading 2012 California Supreme Court case of Brinker Restaurant Corp. v. Superior Court contained a concurring decision of the opinion’s author containing a distinction that statistical evidence could be employed to determine the extent of, but not to establish, liability. Another approach to utilizing statistical evidence discussed in the literature is showing store-by-store disparities to the smallest sample size along with classwide aggregate statistics that could raise inferences necessary to demonstrate commonalities, such as gender pay and promotion disparities on a store-by-store, regional and national basis. Moreover, statistical analysis could be useful to prove that employment disparities were not the result of sex-neutral, performance-based criteria.

Dukes determined that plaintiffs’ submission of 120 declarations, one for every 12,500 class members, coming from only six states, and fourteen states having no affidavits at all, as inadequate anecdotal evidence of a company-wide discrimination policy. But if a more palatable ratio is required than the use of anecdotal evidence to support class certification motions in large cases appears impractical. Hence, while plaintiffs’ counsel should seek as many supporting affidavits as possible, it is recommended their usage be focused on supplementing data-driven evidence to aid a court’s commonality analysis.

Of course, careful narrow drafting of the class definition can prevent case termination commonality issues and increase chances of recovery. However, it could also lessen that amount the class, and counsel, will ultimately receive.

For companies, they should have anti-discrimination policies providing substantial local choices and discretion in employment decisions making employment class actions more difficult. Defense counsel should always be ready to challenge commonality during certification proceedings by arguing the dissimilarities in the class, particularly if the proposed class creates issues of common resolution, and that dissimilarity destroys the ability to find shared solutions. If employees do not face precisely the same discrimination, how can there be common proof?

Although Dukes has made large class actions more difficult, they are not impossible. And perhaps the solution is to par down large, unwieldy classes.