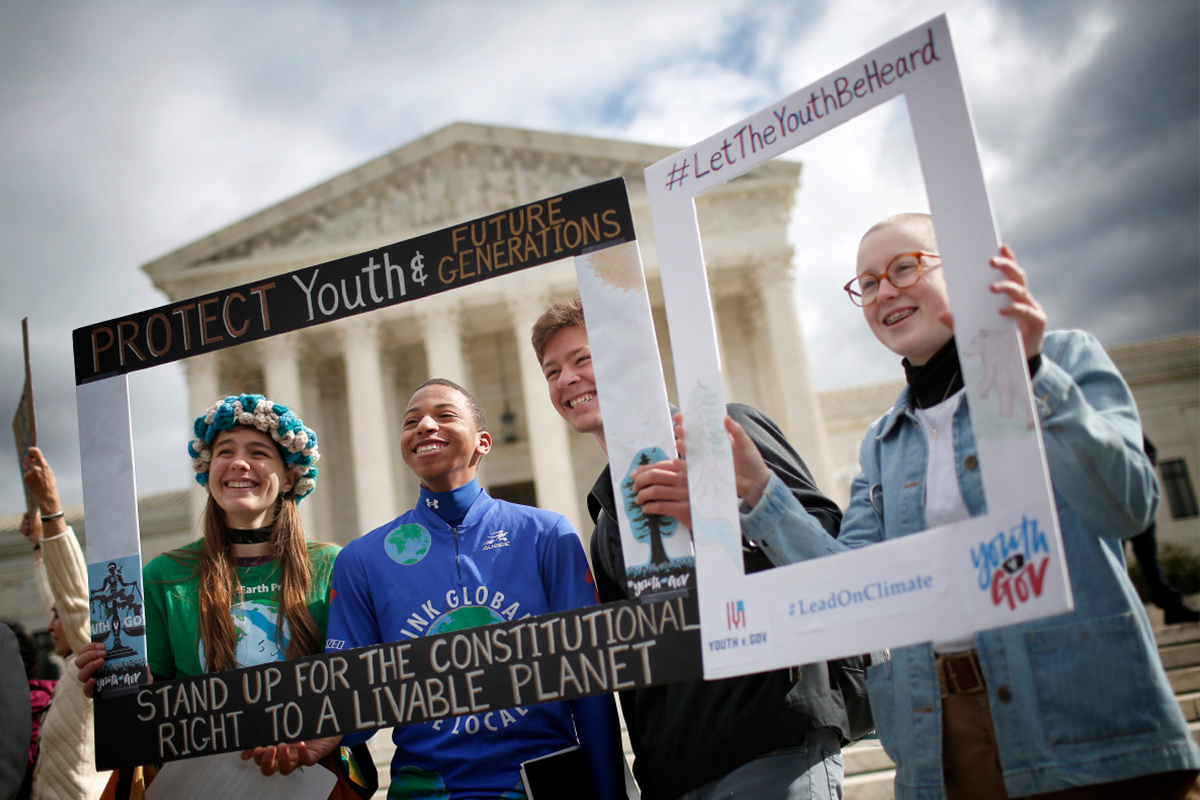 Imagine a lawsuit of young people alleging disproportional and impermissible discrimination of denial of due process under law by federal defendants knowingly and deliberately allowing carbon dioxide (CO2) concentrations levels in the air to rise over generations to unprecedented levels that destabilize the climate system that present and future generations depend for their very survival, seeking injunctive and declaratory relief for violating governmental trust obligations to protect essential natural resources in the “extremely limited amount of time [necessary] to preserve a habitable climate system for our country" before "the warming of our nation will become locked in or rendered increasingly severe."

Juliana v. the United States appears to be that quintessential class action. A wide collection of young people suing numerous federal government agencies for their long-term interest for protection from the dangers of global warming. Bit different than the phone company charging 12 cents extra on everyone's phone bill.

The Complaint and Answer

In August 2015, a collection of youthful plaintiffs and their organizations brought the Juliana class action in Oregon federal court against a vast array of federal agencies seeking a declaration that their constitutional rights have been violated, along with an order for that the U.S. Government entities develop a plan, using existing legal authority, capacities, and resources, to bring their conduct within constitutional compliance.

In January 2017, the federal defendants answered, agreeing with a large body of the plaintiffs’ allegations, including:

When the lawsuit was filed, Barak Obama was named as a defendant President. As is standard practice, Donald Trump was substituted in as a defendant once he assumed the office. The Justice Department moved to dismiss the President as a party. The plaintiffs argued complete relief was not available without a Presidential defendant. The district court was not persuaded, as the gravamen of the lawsuit was challenge to actions, and inactions, of federal agencies regarding environmental and energy policies, and that the plaintiffs failed to meet their heavy burden why a President was essential to the lawsuit. Hence, the Presidential defendant was dismissed.

The federal defendants moved for summary judgment on numerous grounds. The two most substantive arguments, standing, and due process, are summarized below.

Juliana, citing to the U.S. Supreme Court’s decision in the seminal Lujan v. Defenders of Wildlife case, outlined the required elements of standing:

To demonstrate standing, a plaintiff must show that (1) she suffered an injury in fact that is concrete, particularized, and actual or imminent; (2) the injury is fairly traceable to the defendant's challenged conduct; and (3) the injury is likely to be redressed by a favorable court decision

Regarding the ‘injury in fact’ requirement, the Juliana court, citing to the U.S. Supreme Court in Friends of the Earth, Inc. v. Laidlaw Envt’l Servs (I’OC) Inc., stated “[i]n an environmental case, a plaintiff cannot demonstrate injury in fact merely by alleging injury to the environment; there must be an allegation that the challenged conduct is harming (or imminently will harm) the plaintiff.” Plaintiffs declarations included attestations of their flooded homes and injuries derived from rising sea levels and extreme weather events; and how climate change affected their recreational interests due to ocean acidification, degradation of freshwater rivers and lakes, and increased wildfires; along with an injury to indigenous cultural practices and values.

Plaintiffs also provided a gauntlet of expert declarations describing the adverse effects of climate change on these young litigants, and that they will suffer a disproportionate amount of increased financial burden due to its effects throughout their extended remaining lifetimes. The federal defendant argued these injuries were concrete and particularized to them, as opposed to it being a widespread environmental phenomenon.

Plaintiffs’ presented volumes of ‘traceability’ evidence regarding fossil fuel emissions responsible for increased atmospheric CO2 causing increased and accelerating global warming never previously experienced on the planet during the period of human history, with the last five years the hottest in the 123 years such records were kept in the United States, along with unprecedented wildfires and hurricanes in 2017, and the drastic effects of future sea levels rising. The court noted the federal defendants did not provide evidence to contradict these declarations.

Additionally, plaintiffs cited to both the federal defendants usage of fossil fuels to power vehicles and buildings, and systematic policies and practices in support of fossil fuel usage and collateral industries such as federal leasing of National Forest Lands for coal, oil, natural gas and phosphate development, oil and gas leasing in the Outer Continental Shelf, authorization to harvest a half-trillion board feet of timber in the last century, and permitting livestock grazing on 95 million acres on federal land. Federal defendants were unable to argue these activities could occur without federal governmental approval. The district court stated that “[a]t this stage of the proceedings, the Court finds that plaintiffs have provided sufficient evidence showing that causation for their claims is more than attenuated. Plaintiffs' ‘need not connect each molecule’ of domestically emitted carbon to their specific injuries to meet the causation standard.”

Regarding redressability, the federal defendants argued that no evidence existed that a reduction of climate change factors would arise from any immediate reduction in emissions caused by the United States. The district court did not find merit in that argument either, citing the Ninth Circuit’s ruling in WildEarth Guardians v. U.S. Dep’t of Agriculture that “[t]he mere existence of multiple causes of an injury does not defeat redressability, particularly for a procedural injury. So long as a defendant is at least partially causing the alleged injury, a plaintiff may sue that defendant, even if the defendant is just one of the multiple causes of the plaintiffs’ injury.”

The federal defendants argued that individuals did not have a fundamental Constitutional right to an environment capable of sustaining human life. In response, the court stated:

where a complaint alleges knowing governmental action is affirmatively and substantially damaging the climate system in a way that will cause human deaths, shorten human lifespans, result in widespread damage to property, threaten human food sources, and dramatically alter the planet's ecosystem, it states a claim for a due process violation. To hold otherwise would be to say that the Constitution affords no protection against a government's knowing decision to poison the air its citizens breathe or the water its citizens drink.

Plaintiffs also brought their claims under the ‘state-created danger theory,’ commonly utilized against law enforcement for dangers created by the officer. Under this theory the state’s action must place the plaintiff "in a worse position than that in which he would have been had the state not acted at all," and the plaintiff must show the "state actor ... recognize[d]" the unreasonable risks to the plaintiff and "actually intended] to expose the plaintiff to such risks without regard to the consequences to the plaintiff.” The federal government argued their actions did not rise to the required level of "deliberate indifference." However, plaintiffs submitted volumes of expert witness declarations and accompanying documents demonstrating the federal defendant has long disregarded the known adverse consequences of continued use of fossil fuels. Plaintiffs’ experts included President Jimmy Carter’s former chairman of the Council on Environmental Quality providing an in-depth historical record spanning ten presidential administrations indicating the federal government's long-held knowledge of the links between fossil fuels and global warming. The district court, while acknowledging plaintiffs high bar to ultimate success, provided enough evidence on the ‘deliberate indifference’ question to defeat summary judgment.

While consumer class actions continue to grow in scope and magnitude, it is hard to imagine one encompassing more putative class members against the vast array of federal government agencies. Juliana is a class action that will be watched for quite some time. Simpluris will continue to report on significant developments as they occur.