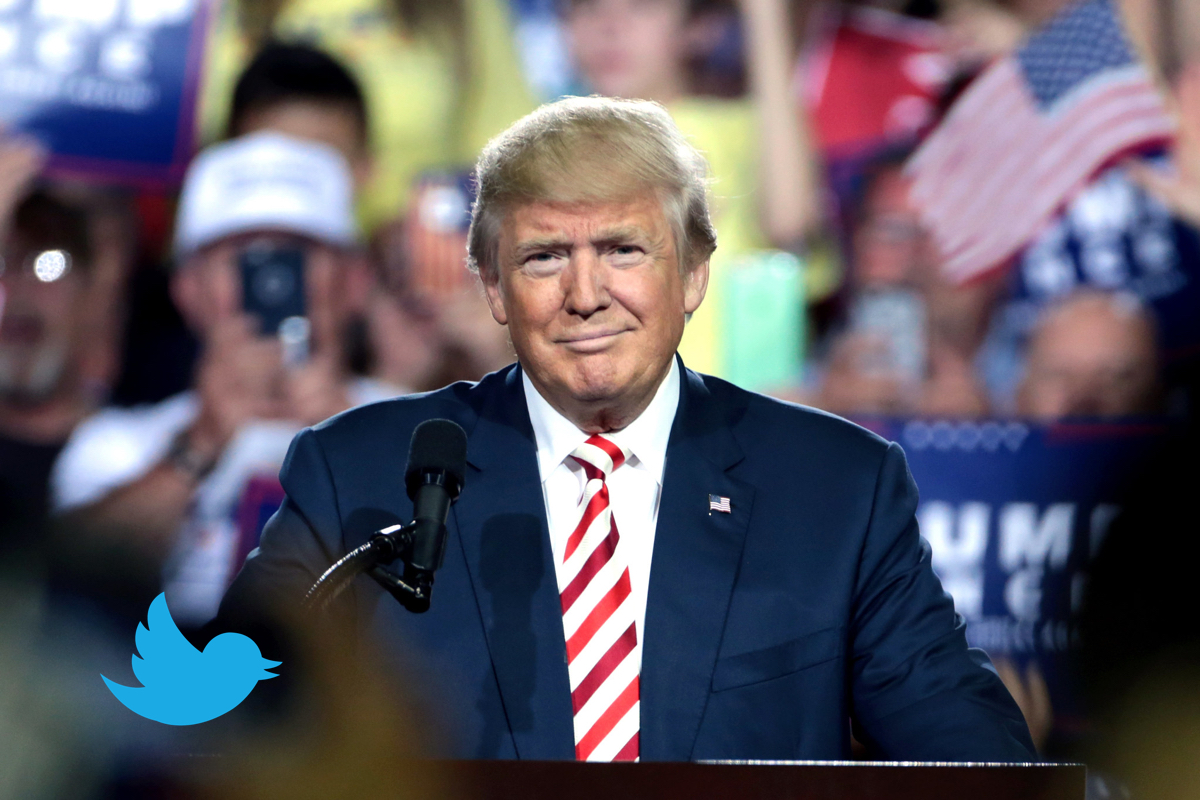 The Wall Street Journal reported that President Trump posted a tweet condemning the George Floyd protests in Minneapolis. As a result, Twitter flagged his comment since it went against its glorification of violence policy. The tweet is now only visible if "view" is clicked.

The protests began in Twin Cities, Minnesota following the death of George Floyd by the Minneapolis Police Department on Monday. Police officers responded to a call at a grocery store when an employee claimed that Floyd attempted to use a counterfeit $20 bill. A video taken by a teenager shows officers using a knee restraint while Floyd tells them that he can't breathe. The killing incited anger over unnecessary police brutality towards Black Americans. The protests turned violent with widespread rioting, looting, assault, arson, and property damage. It also spread nationwide.

We’ve taken action in the interest of preventing others from being inspired to commit violent acts, but have kept the Tweet on Twitter because it is important that the public still be able to see the Tweet given its relevance to ongoing matters of public importance.
- Twitter Tweet

Just after midnight on Friday morning, Trump tweeted "...These THUGS are dishonoring the memory of George Floyd, and I won’t let that happen. Just spoke to Governor Tim Walz and told him that the Military is with him all the way. Any difficulty and we will assume control but, when the looting starts, the shooting starts. Thank you!" The reference to "...when the looting starts, the shooting starts," is a dark page in U.S. history in 1967 when "when Miami Police Chief Walter Headley used it at a news conference to explain how the threat of police violence had prevented riots and looting in the city. Mr. Headley’s comments and his 'get-tough' approach to crime sparked outrage in Miami’s black community, and riots broke out in the city in the summer of 1968."

On its own account, Twitter said, “We’ve taken action in the interest of preventing others from being inspired to commit violent acts, but have kept the Tweet on Twitter because it is important that the public still be able to see the Tweet given its relevance to ongoing matters of public importance."

Trump posted the same comment on his Facebook account, but the social media giant did not remove it. Mark Zuckerberg, founder and Facebook CEO said he personally disagreed with Trump's comment. However, as the leader of an institution of free expression, Zuckerberg felt that the post should remain because of the reference to possibly use military force, which the public should know about. He added, that “ultimate accountability for those in positions of power can only happen when their speech is scrutinized out in the open.”

Zuckerberg also addressed the discrepancy in the way that Facebook and Twitter handle Trump's controversial posts. He told Fox News that, "We have a different policy than, I think, Twitter on this...I just believe strongly that Facebook shouldn't be the arbiter of truth of everything that people say online. Private companies probably shouldn't be, especially these platform companies, shouldn't be in the position of doing that."

Trump responded that his tweet was not intended for police to shoot rioters. He posted, “I don’t want this to happen, and that’s what the expression put out last night means.” He later tweeted, “It was spoken as a fact, not as a statement. It’s very simple, nobody should have any problem with this other than the haters, and those looking to cause trouble on social media.”

Flagging Trump's tweet isn't the first time Twitter has challenged the President's comments. On Tuesday, Trump posted invalid comments about the voting process and mail-in ballots. On those tweets, Twitter applied a fact-checking label it uses for tweets with misinformation or compromises its civic integrity policy. The following day, Trump signed an executive order targeting social media companies by preventing online censorship and increasing their liability through government regulations.

The WSJ reported that "The key provisions in the order are proposed limitations on the legal protections Washington established for online platforms in the 1990s, in the internet’s early days. Those protections were created by Congress in Section 230 of the 1996 Communications Decency Act." Section 230 provides immunity from liability for providers and users of an "interactive computer service" who publish information provided by third-party users. "No provider or user of an interactive computer service shall be treated as the publisher or speaker of any information provided by another information content provider."

Tech companies are expected to legally challenge the order.