TCPA and World of Warcraft – The Class Action

The distant leaders stood amazed by intelligence from Earth that disputes are not often settled with axes and swords, but usually with boxes of documents submitted by earthly gladiators called ‘attorneys’ or ‘lawyers’ to arbiters of disputes called ‘judges’. These scholarly leaders wear black robes to demonstrate their authority.
By Simpluris Research Team 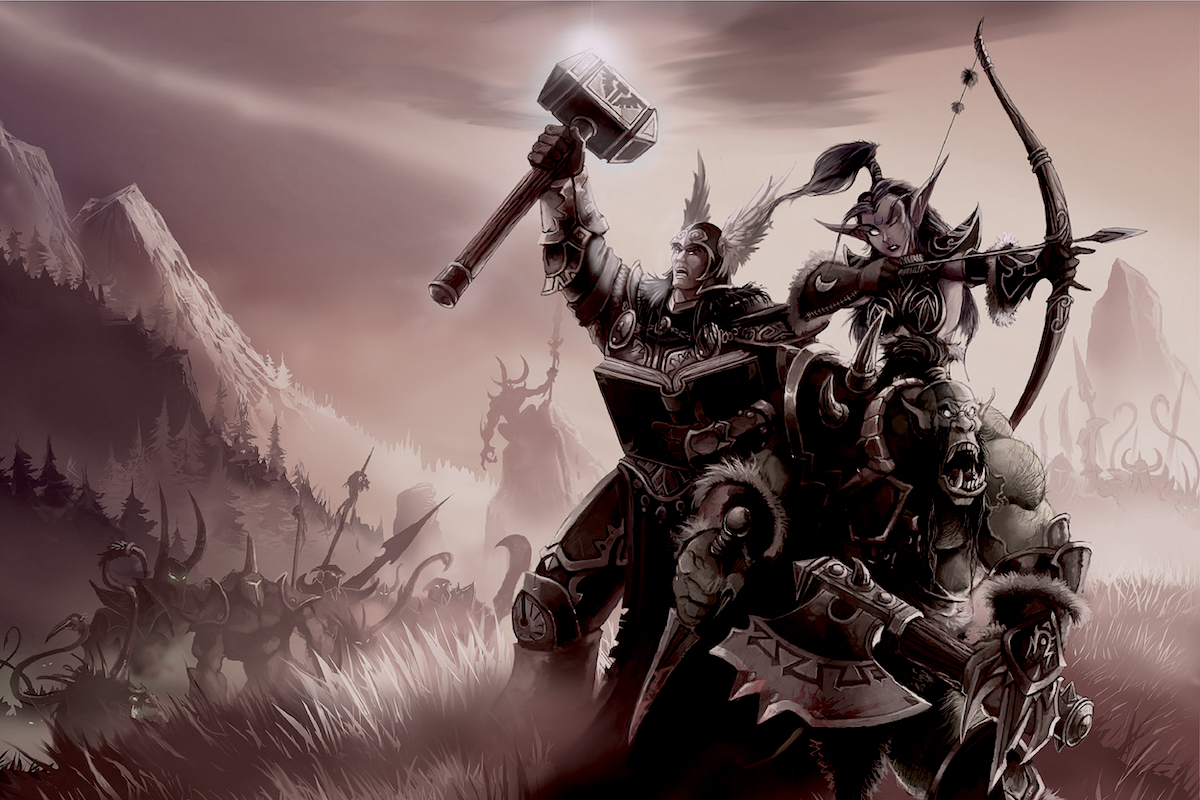 We do know that film producers on Earth, in the mighty kingdom called Universal Pictures, storytelling promoters were sending hundreds of thousands of text messages promoting their ‘movie’ Warcraft, a fictional tale of the first encounter between humans and orcs. We also know there are no class actions on Azeroth, but a primitive judicial system does indeed exist, including a recent war crimes trial for the deposed leader of the Horde Gorrosh Hellscream. No lawyers on Azeroth though. Clan leaders act as prosecutors and defense counsel.

In the empire called the United States of America, a law entitled the Telephone Consumer Protection Act (TCPA) restricts and determines penalties for sending impermissible text messages without recipient consent. However, the penalties for violating sensibilities are not as severe as on Azeroth. Refer TCPA . The Azeroth leaders learned that over 400,000 combatants were converging on a possible ally assisting in promoting and glamorizing their world. Were these allies under some kind of attack for a ‘class action’?

The distant leaders stood amazed by intelligence from Earth that disputes are not often settled with axes and swords, but usually with boxes of documents submitted by earthly gladiators called ‘attorneys’ or ‘lawyers’ to arbiters of disputes called ‘judges.’ These scholarly leaders wear black robes to demonstrate their authority. Baffled, but in search of accurate information in preparation for possible future eventualities, recently installed Horde leader Sylvanus Windrunner ordered Stormwind Intelligence (akin to the CIA) to learn more about these seemingly odd developments. Because of the importance of the mission, Renzik the Shiv, top super spy (called ‘rouges’ on Azeroth) was selected for the long journey to Earth and ordered to gather information about its possible allay Universal Pictures, and how information, technology, and gladiators on the distant planet settle large disputes by paper and talk, resulting in the payment of money tribute and agreements to act, or not act, in certain ways.

Renzik was ordered to not engage in any use of force or destruction.

Renzik wanted to learn the means these battles are fought, won, and lost. Although not being particularly social, Reznik decided to contact Simpluris directly. Sam, a very helpful project manager, experienced and well trained to assist all class action administration inquiries, advised Renzik that ‘our role is to find all the people affected by the class action, determine what amounts to pay everyone as ordered by the judge, and if there are problems in evaluation of the claims consult the attorneys.’ Reznik was confused. ‘So, are you a peacekeeper? Which side are you on?’ Simpluris Sam said, ‘we are not on anyone’s side. We administer the court’s order for both sides.’

Reznik learned on Earth, in a central Florida federal courtroom (he never figured out why two courts, state and federal, were in the same place), a group of gladiators ‘attorneys’ had unleased one of their greatest weapons --- a ‘class action.’ ‘OK,’ Reznik thought, ‘this class action business does seem like a big deal.’ He had learned class actions basics by clicking the link for class action 101 and 102. (Very informative) The attorneys were the generals, forming an ‘army’, first with a handful of putative class action representatives standing in for more than 450,000 probable members, ready to counterattack their designated targeted enemies, Universal Pictures, Legendary Pictures and Handstack, a marketing company. The reason for the planned offensive --- these adversaries sent text messages promoting the film Warcraft to almost a half-million recipients without their consent and no interest to receive the advertisements, a violation of the TCPA. The attorneys rallied (in a loose sense) an estimated 466,779 recipients receiving one or more text messages sent by or for the other adversaries from May 1, 2016, through April 8, 2019, to engage the enemy in a one-sided flow of information battle.

Although putative allies were under a counterattack, from a conflict management point of view, Reznik thought it all seemed quite manageable.

Reznick Reports Back to Azeroth

Reporting back to Azeroth, our harmless spy advised ‘attorneys’ lead their class-action representatives, on behalf of the entire class of almost one-half million, to the battlefield, in this case, a courtroom. Their battle cry, unwanted “Warcraft” text messages. The outrage of counterattack included victims continuing to receive unwanted text messages even after notifying their enemies to stop contacting them. Others were contacted even though they had placed their names on the Do Not Call Registry, a demilitarized no battle zone. Lastly, these combatants sent their text messages outside of the TCPA permissible hours, 8 a.m. and 9 p.m. local time, against the norms and rules of this American society, even though Reznik thought taking away nighttime strikes forfeited a tactical advantage.

Reznik reported the manner of the battle commencing, trying the best he could to explain fact and expert discovery processes. Class action certification briefing reporting was more complicated, but luckily trusty Simpluris Sam directed him to these web pages describing all aspects of class actions. Reznik also learned that the producers of the movie about his planet were preparing a summary judgment. ‘Summary judgment seems complicated,’ Reznik thought. He scrapped reporting on this battle tactic to Windrunner. However, the report emphasized no one on Azeroth faced any danger from this conflict.

Reznik knew from experience events off the battlefield can have a great effect on the front lines. While this great Warcraft clash was occurring the District of Columbia Federal Circuit (a different but related court) invalidated aspects of the FCC 2015 Declaratory Ruling in ACA Int’l v. FCC, changing the landscape of the conflict (learn more here). Defendants Universal and Legendary claimed that Handstack alone was the initiator of the text messages and thus, without agency, only Handstack, a largely judgment-proof marketing company, would be liable. Reznik saw a possible conflict among these seemingly allied forces. But more importantly, though, ‘What good is victory without obtaining the spoils of war?’ (Note: he left Earth never learning the term ‘deep pockets.’)

Our hard-working spy’s investigation found that before the major battle (class action certification) was to commence a peace conference was formed. On Earth, these peace conferences are called ‘mediations.’ Reznick came to respect both sides as proud adversaries, as they met for three full days in ‘mediation’ to resolve their differences and avoid further bloody (not really) conflict. He thought, does a class action settlement redefine warfare? He knew from reading all the court papers that as the battle commences the opponents’ legal position holds little value or respect. We are not scared of your weapons. Your arguments are empty, not supported by the facts or the law. We will never concede. But once the settlement motion was introduced, the parties suddenly appeared to value the other’s positions. Applicable law and evidence suddenly converged into an agreement to settle their differences.

Reznik wondered --- glory achieved by agreement without vengeance? However, he dutifully reported battle adversaries on Earth to agree that one side pays the other tribute in the form of money, and sometimes agree to peace terms to not again engage in the same conduct in the future. He reported those non-monetary peace terms are called ‘injunctions,’ and that the attorney gladiators could go back to court seeking further penalties, even imprisonment if the terms of the agreement are violated. Our spy pondered ‘maybe this is better than war, death, and destruction.’

Each approved class member will receive $35 or $50 each, depending on an agreed criterion, a fair sum for unwanted text messages but hopefully enough to stifle further similar activity. The agreement contained various injunction terms. Handstack, the marketing company, would not use the subject cell phone number list for any future marketing projects, they would institute reasonable procedures to do so, would consult the Do Not Call Registry before any future text message campaigns, and develop internal written procedures to ensure proper future TCPA compliance.

Renzik wondered why any combatant would give up tools of warfare. And so much battle over messages? He remained quite mystified about methods of conflict on Earth but appreciated it was more peaceful than Azeroth. Renzik questioned whether to report his views and opinions back to his leadership. Might peace and negotiation be better to resolve disputes than endless battles, war, and destruction?

Our pondering visitor had also learned some human etiquette. Before embarking for home, he called Simpluris Sam, to thank him for the kind assistance provided. Sam, very happy to be hearing from his other world acquittance, admitted being an avid World of Warcraft fan. A lifelong friendship between two worlds was solidified by a simple ‘thank you’ call.

Renzik never reported his views regarding the efficacy of Earth’s ‘softness’ regarding the conflict. His time on more peaceful Earth was having an odd effect, and a yearning for the greater intelligence gathering intrigue back on Azeroth raged within.

The movie Warcraft grossed $433 million worldwide. According to the authoritative Hollywood Reporter newspaper, the film needed at least $450 million to break even. But, it was the highest-grossing movie of all time based on a video game.

Renzik, on his journey back to Azeroth, realized he never watched Warcraft, the movie.

Reports from Universal Pictures are that no sequel is planned, or sales of the rights on Azeroth. Lack of a legal system… and no movie theaters were seen as entry barriers to this new market.

Simpluris Sam continues to help attorneys and class members with their informational inquiries, and managing class action administration, while continuing to love World of Warcraft. He has not encountered other questions beyond Earth since assisting Reznik.

Author’s note: Thanks so much to Riznik for offering his unique insights about Earth’s legal system. Our hard-working project manager Sam agreed on behalf of Simpluris to not disclose these facts to anyone on Azeroth. If our readers encounter anyone from Azeroth, we urge you to respect the agreement. Thanks!