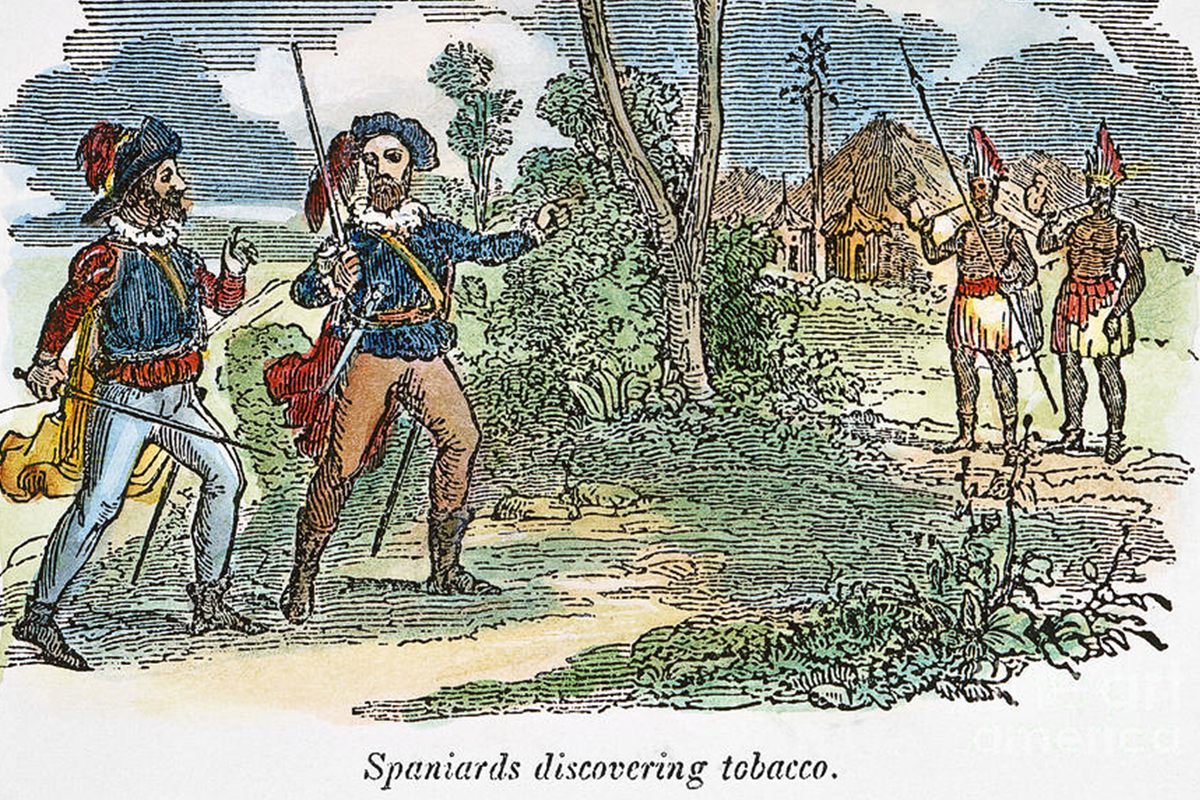 In January 2019, a Florida jury deliberated just 90 minutes after a three-week trial. Verdict: Tobacco giant R.J. Reynolds not liable for the long-term smoker’s death. But Bloomberg reports that the Florida courts, a final bastion for these cases, still has 3,000 to 4,000 individual smoker cases against tobacco companies still pending. Also, in January 2019 a trial court restored a previously vacated $20 million tobacco smoker’s award.

Tobacco and class actions have a long history. So let’s get started!

Before the Age of Exploration, tobacco was unknown to the Old World. Of the four major agricultural commodities brought from the New World to the Old --- potatoes, corn, tomatoes, and tobacco, the latter has always caused the largest legal stir. (But, imagine Irish folklore without potatoes and Italian food without tomatoes).

In 1572, Nicolas Monardes, a highly regarded Spanish doctor and botanist, wrote a treatise on medicinal plants in the New World, including tobacco, professing it could cure 36 health problems --- including cancer. In 1578, Sir Walter Raleigh brought the first tobacco from Virginia to England. Thereafter, his countrymen also touted the health benefits of smoking tobacco. (No record exists that the tobacco industry was behind these claims.)

In 1604, King James the VI wrote his own treatise, A Counterblast to Tobacco. (Sounds like a new age internet title.) The concluding sentence catches the flavor of his views and exhibits a prescient knowledge of future ramifications.

A custom loathsome to the eye, hateful to the Nose, harmful to the brain, dangerous to the Lungs, and in the black stinking fume thereof, nearest resembling the horrible Stygian smoke of the pit that is bottomless.

King James raised tobacco taxes and tariffs attempting to stem the plant’s popularity tide. However, over time, the financial gains to crown and businesses altered a royal opinion. Indeed, America was born and initially sustained from tobacco sales revenue. It was ‘the’ business.

Adolf Hitler was a chain smoker until he quit in the mid-1920s, reversed gears and became an anti-smoking crusader. After becoming German Chancellor, he instituted the first modern anti-smoking campaign, increasing taxes, banning its use in certain public places and even funding public health research regarding the adverse effects of smoking. Who woulda thought???

In 1964 the U.S. Surgeon General issued its historic groundbreaking Report on Smoking and Health that cigarettes cause cancer and other diseases. Between 1976 and 1993, six studies concluded that smoking accounted for six to eight percent of healthcare costs in America, more than $50 billion in 1993, amounting to one-quarter of state Medicaid costs.

From the 1950s to 1994, over 800 lawsuits were prosecuted against tobacco companies for fraud, violation of consumer protection statutes, negligent manufacture, and advertising. Only two succeeded through trial; both reversed on appeal. The industry generally argued that tobacco was not harmful, the cancer was caused by other factors, and the smokers assumed the risk. Then, industry documents starting leaking, demonstrating that companies had knowledge that tobacco was additively piercing the previous surefire defenses.

In 1994 the Mississippi Attorney General started a cavalcade of 46 state attorney generals, five U.S. territories, and the District of Columbia bringing similar lawsuits on the premise that the tobacco industry has caused a major health crisis and should pay for it, essentially seeking reimbursement for state Medicaid expenditures. These lawsuits were on behalf of the states the attorney generals represented, not the citizenry per se, and thus --- not a class action.

In 1998, the state attorney generals settled with the country’s five largest cigarette manufacturers, Brown & Williamson Tobacco Corporation, Lorillard Tobacco Company, Philip Morris Incorporated, R.J. Reynolds Tobacco Company, Commonwealth Tobacco, and Liggett & Myers. The industry agreed to pay the settling states and governmental entities billions of dollars forever based upon sales volume, along with imposing restrictions on the sale and marketing of cigarettes. The tobacco industry was freed, eternally, from facing class-action lawsuits in those the plaintiff state’s courts or by their governmental entities.

The yearly payments are based on a formula of annual cigarette sales with the base amount increasing gradually from 2000 to 2018. The 2018 payment of $9 billion continues in perpetuity. To date, the industry has paid the states $146 billion.

The agreement addressed cigarette advertising, including direct and indirect targeting of youth, and prevents the use of cartoon characters in any promotional materials. Billboards, transit ads and other outdoor advertising not close to retail stores selling tobacco are also prohibited, along with product placement in entertainment media. No longer can the industry provide free samples anywhere. This activity is now restricted to adult-only facilities. Branded merchandise and sponsorships are also severely limited.

As the industry hid important scientific information from the public for so long, the agreement also calls for restrictions on lobbying regarding different categories of tobacco control legislation and administrative rules, to not suppress their health-related research, and to not make material misrepresentations regarding the health consequences of using tobacco. The MSA also disbands and prevents the creation of any new tobacco industry ‘research’ organizations, such as the now-defunct The Tobacco Institute. It also created a counter organization, the ‘Truth Initiative,’ focusing on encourage teens not to start smoking, and encouraging everyone to quit.

As stated above, leaked documents of the tobacco industry’s long-held knowledge of the adverse effects of smoking were the catalyst for the MSA. Thus, part of the settlement requires the participating manufacturers to place all non-privileged documents produced in discovery regarding smoking and its health effects online.

The MTS Is Not a Class Action

As the MTS and attendant litigation was not a class action, why is it being discussed amongst these class action administrator pages and law review articles? Part of the reason is that tobacco litigation had many similar characteristics of class actions, the enormity for one, the combined injunctive, and extended payout period. But all willing plaintiffs total a readily identifiable 50 (states) plus some territories. An, unlike class actions, these ‘individual’ actions did not require court review of the settlement agreement. (We at Simpluris inherently view class actions superior to most other forms of court proceedings.)

The MTS stated primary purpose is to promote public health and decrease youth smoking. According to the Campaign for Tobacco-Free Kids through 2017, the tobacco industry has paid $146 billion dollars pursuant to the settlement. Yes, billion. ($7.3 billion was paid in 2017). The settlement leaves it up to the states to decide how to spend the funds. Only a few states place more than a marginal amount of these funds for the stated primary purpose. For instance, only a paltry $720 million of those funds were designated for state tobacco prevention programs. The Center for Disease Control has recommendations on how much should be spent on these programs. 40 of the 46 states and the District of Columbia spend less than 50 percent of those thresholds.

Paradoxical uses of the proceeds have included North Carolina allocating 75 percent of its settlement funds to aid tobacco production and marketing, including curing equipment, a tobacco auction hall, and media presentations at a tobacco museum. South Carolina provided 15 percent of its settlement funds to tobacco farmers for price supports based on failing demand for the product.

Class actions require court approval to ensure that class members are properly compensated and protected. However, this state attorney general/industry settlement did not require any court sanction. It is doubtful that a class action court would have permitted these funds to find their way in back into the pockets of the tobacco industry, or such small amounts would be allocated to smoking prevention and education.

The other side of that argument is that the states spent money on health care because of cigarette smoking, and money is money. If it were devoted for a particular purpose, such as health care, the states could easily just readjust their budgets to allocate those non-MTS funds from health care to other budgetary items. However, the settlement is instructive to the legal practitioner seeking ideas to structure class action settlements and effectuate sought-after policy changes.

Experts contend over 440,000 Americans die annually due to tobacco use. Almost 78,000 deaths are estimated in Great Britain. Both countries are seeing a small, gradual decline in cigarette usage and associated death rates. The American tobacco industry boasts of close to $50 billion a year in profits.

King James would not be happy.