Keen fight fans and critics observed Pacquiao’s right jabs were not landing as hard and fast as before, notably from the fourth round onwards. Indeed, right after Mayweather was announced the winner Pacquiao’s team revealed that he was actually hampered by a shoulder injury, which had started hurting from the third round and had been re-aggravated in the fourth. One version of the injury’s genesis is that about three weeks before the match, Pacquiao collided with another fighter during sparring, entangled arms resulting in a right rotator cuff (the ball of muscles and tendons attaching the upper-arm bone to the shoulder socket) tear. The lawsuit that followed alleged the injury predated the fight’s contract signing. In either event, the media, public and Nevada State Athletic Commission (NASC) were not timely informed.
By Simpluris Research Team 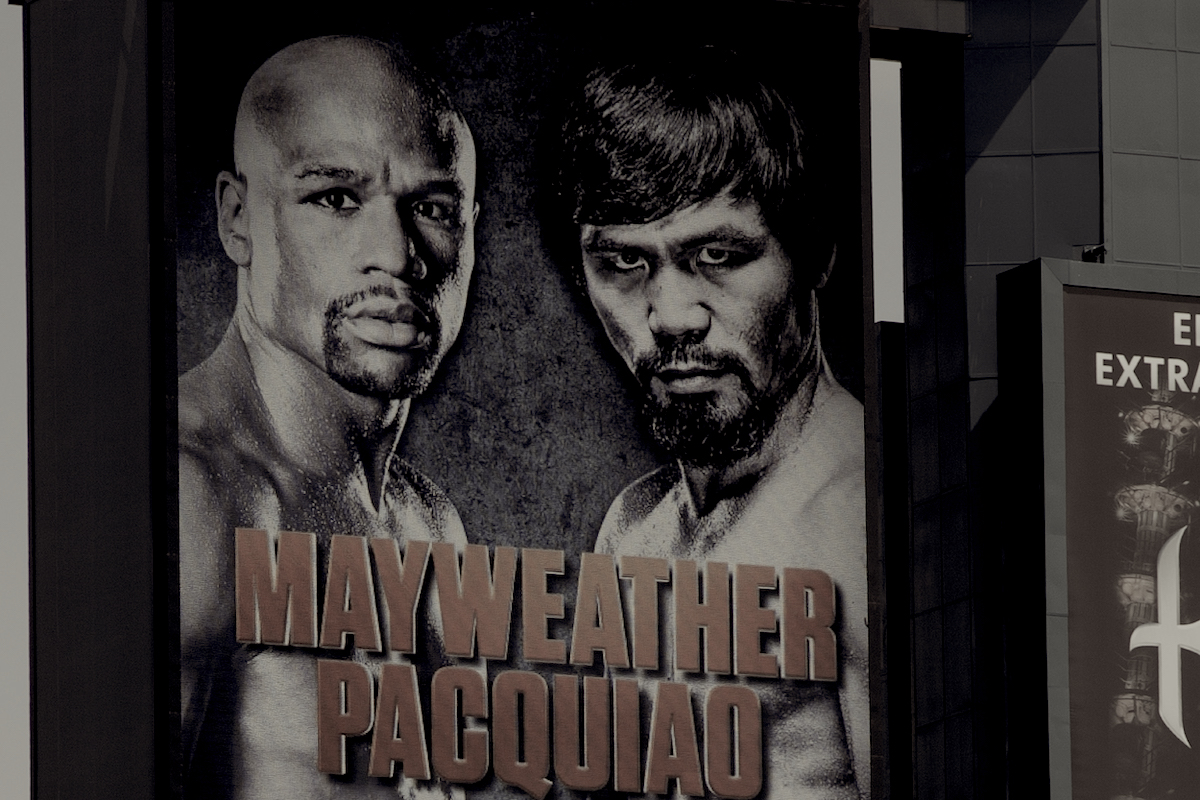 Pacquiao grew up impoverished in a single-room hovel in the remote Southern Philippines countryside. As a child he foraged and hunted for food in the dense jungle and surrounding mountains, while his father scaled more than 70 coconut trees a day to make ends meet. Enduring taunting from their neighbors, Pacquiao and his family of six sometimes endured days without food. He spent his teenage years selling practically anything in the streets before deciding to quit school and leave home at the age of 16.

Meanwhile … far way in the ghettos of Grand Rapids, Michigan Mayweather life was surrounded by hunger, drugs, crime and poverty. His dysfunctional family had several drug addicts. His father’s anger issues often turned violent. As a baby, the future champion’s father used the tiny body as a human shield to protect himself from a gunshot. His father was imprisoned for five years from pushing drugs.

While there is no evidence these poor boys were ever beggars, they certainly ended up at the banquet table.

In their heyday Pacquio and Mayweather were undisputedly among the best in the history of boxing. Both earned places in the Guinness Book of World Records; Mayweather for his stellar record of 50-0, with 26 knockouts, the most bouts undefeated by a world champion boxer in a career; and Pacquiao for being the first boxer ever to win world championships in eight different weight divisions, as well as the first in history to win major world titles in flyweight, featherweight, lightweight and welterweight. During their prime, both occupied the top spots in Forbes’ List of the World’s Highest-Paid Athletes.

Finally, in May 2015, when Mayweather was 38 years old and Pacquiao was 36, neither still at the top of their game but still considered the best active professional boxers in the world, the two camps finally arranged for a face off in what would prove to be one of the most hyped boxing matches in history. Soon after signing the contract, Pacquiao and Mayweather started training for and promoting the “the Fight of the Century.”

Lawyers will later argue that the pedigree of the fighters, five years of negotiations and hype, made this sporting event unique and unprecedented sporting event --- requiring a different analysis for consumer protection law than usually associated with sporting events.

And of course, the numerous class action suits that followed.

Promoting the “Fight of the Century”

Preliminary to our champions entering into their agreement to fight, they required a preliminary agreement with Showtime and Home Box Office (HBO.) In that contract our rags to riches titleholders’ promotion companies were mandatorily required as a material term of their contract to disclose any conditions that would hinder their performance. Specifically, the contract required the promoters “use their best reasonable efforts to ensure that the fighters participating in the Event are and shall be ready, willing and able to participate in the Event to the best of their ability, and shall honestly compete and give an honest exhibition of skills and Promoters shall promptly inform Networks if it believes that such is not the case.”

Before the fight, Pacquiao claimed that he was “conditioned 100% spiritually, mentally, [and] physically” while his trainer Freddie Roach stated that his boxer’s speed was faster, his punches were harder and that he had never seen Pacquiao in “such pristine condition.” Pacquiao also declared he was “ready to win,” and claimed the fight is “an event you cannot miss.” Pacquiao’s promoters exclaimed he looked “really good,” was “in great shape,” was “super confident and relaxed,” and looked “better than . . . ever.”.

And the overriding legal question --- are boxing consumers only entitled to watch a fight without concern about the quality of athletic performance, or is a seller of entertainment services knowingly marketing a defective product? Consumer plaintiffs would later argue that the last thing the fighters and their promoters would want any negative publicity, such as a major pre-fight injury of one of the combatants, shrouding the monumental “Fight of the Century” that would dampen the frenzied demand for Pay Per View (PPV) sales.

‘The Fight of the Century’ - A Financial Success!

Boxing fans and critics generally found the bout disappointing, boring, dull, with Mayweather prevailing by a close, by unanimous decision of the three judges. (Yup, three judges, just like a court panel). Mayweather had a defensive strategy, Pacquiao had difficulty landing punches. But it was still a massive success for promoters, shattering the previous record for total pay-per-view buys, generating more than $400 million in domestic pay-per-view revenue alone. It still ranks as the highest-grossing pay-per-view of all time. Combined revenues from PPV and ticket sales, corporate sponsorships, the boxers took home a combined $350 million.

Keen fight fans and critics observed Pacquiao’s right jabs were not landing as hard and fast as before, notably from the fourth round onwards. Indeed, right after Mayweather was announced the winner Pacquiao’s team revealed that he was actually hampered by a shoulder injury, which had started hurting from the third round and had been re-aggravated in the fourth. One version of the injury’s genesis is that about three weeks before the match, Pacquiao collided with another fighter during sparring, entangled arms resulting in a right rotator cuff (the ball of muscles and tendons attaching the upper-arm bone to the shoulder socket) tear. The lawsuit that followed alleged the injury predated the fight’s contract signing. In either event, the media, public and Nevada State Athletic Commission (NASC) were not timely informed.

A day before the fight, Pacquiao answered “no” on the Pre-Fight Medical Questionnaire when asked if he had suffered any shoulder injury or have any serious medical illnesses or conditions of any kind. At the same time, Pacquiao failed to inform NSAC physicians about his injury during his pre-fight weigh-in interview. Finally, three hours before the fight, and for the first time, a member of Pacquiao’s team informed NSAC physicians about Pacquiao’s shoulder injury. They hoped to obtain approval to inject the injured shoulder with an anti- inflammatory cortisone injection and painkillers. NSAC physicians denied the request as it was only made verbally, and incorrect paperwork was submitted the previous day. The NSAC physicians did, however, medically clear Pacquiao to fight.

Pacquiao underwent arthroscopic rotator cuff repair surgery immediately after the game for this "significant" tear in his shoulder.