The 400 million dollar fight of the century, but Manny Pacquiao never disclosed his torn rotator cuff injury prior to signing the deal, or telling Nevada boxing authorities before the fight. A defensive, boring fight resulted. Numerous class actions were quickly filed, everyone in the arena or watching on HBO. The defendants come out swinging, filing motions to dismiss in the first round. The fans ‘knocked out’ in the first round’ with the federal district court judge stating ‘disappointed fans injuries’ are not recognized by the courts. Scores of lawsuits, class actions and individual actions, consumers knocked out. Part II of III.
By Simpluris Research Team 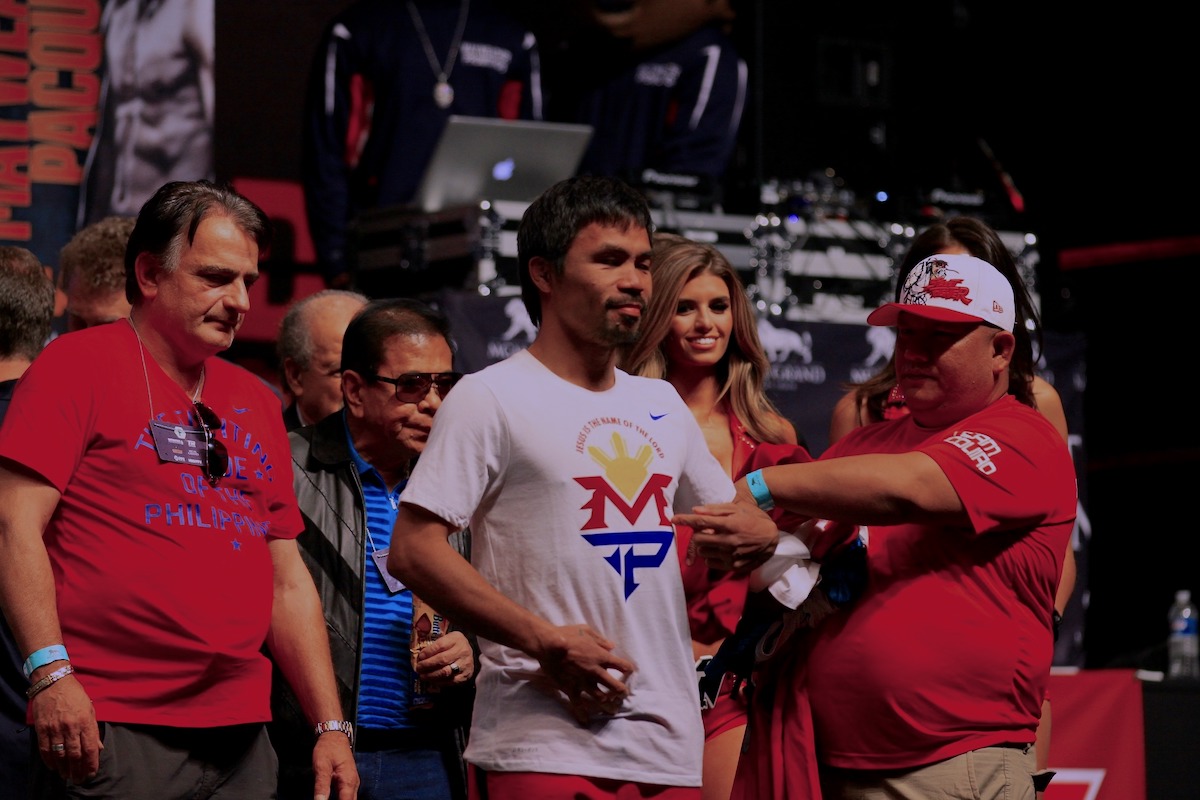 The Class Action Complaints – The Multitude

Lots of lawsuits quickly followed. 13 jurisdiction-specific (meaning within the state) class action complaints, another on behalf of those attending the fight in person, and yet another for those holding distribution rights. There also was more than score of individual actions. Plaintiffs couched their claims as a standard consumer fraud --- allegations that all defendants admitted knowledge of Pacquiao’s medical condition before any ticket sales, and obviously before the fight, orchestrating a business plan to conceal the injury that would have had an overwhelming negative effect on PPV sales. A basic false pretenses case.

Defendants vigorously responded these claims only regard the quality or outcome of athletic performance and hence are not actionable. Sorry the fight was boring. However, allegations regarding business strategy and financial performance are misplaced.

Ultimately, the members of the Plaintiff Classes in this litigation consisted of:

1. consumers residing in thirteen states who purchased a PPV telecast;

2. commercial entities who purchased the PPV telecasts; and

3. consumers who purchased tickets to view the fight in person.

The Parties – And in This Corner – Three Corners?

Ev'rywhere I hear the sound
Of marching charging feet, boy
'Cause summer's here and the time is right
For fighting in the street, boy

Pacquaio and Mayweather may have come out of different corners ready to pound each other silly in the boxing ring. But between the courthouse ropes they lock arms, defending an onslaught of punches from bound paper and talk. The less entertaining weapons of lawyers in combat.

In Pacquaio’s corner, or at least defended by the same legal team, were his promotion company and HBO. Why is HBO in Pacquaio’s corner? Plaintiffs contended since the boxer invited HBO camera crews to observe and film his training for a documentary they knew about the shoulder injury and never publicly disclosed it while continuing to favorably assist Pacquiao's fight promotion.

Mayweather and his promotion company were sued as he boosted having a mole within Pacquiao’s camp reporting on conditions and went ahead with the joint enterprise knowing Pacquaio had a torn rotator cuff injury.

The Third Corner – The Consuming Fans

The PPV purchasers of the residential telecast are in the crowed third corner. 4.6 million purchasers, ranking the ‘Fight of the Century’ the highest selling pay per view event in history. Lawsuits from a multitude of states consistently alleged all defendants were required but did not disclose the nature and extent of the Pacquaio’s injury to the public and that he failed to certain disclosure the injury to the Nevada State Athletic Commission (NSAC). This, of course, would be the largest class.

Those attending the fight in the MGM Grand Garden Arena in Las Vegas are another class on the same grounds. A third class were licensees, such as bars, and other promoters, alleging they lost good will from disappointed customers.

Due to the large number of similar cases having common questions of fact pending in a many different judicial districts the dispute was placed into the Multidistrict Litigation program and ended up assigned to the federal court in Los Angeles, California. Over 40 class actions in one courtroom.

The Fight – The Fans

Amidst the anticipation, controversy and hype surrounding the fight, Pacquiao and Mayweather traded jabs and dodges across 12 tightly contested rounds. Mayweather landed 148 total punches to Pacquiao’s 81. The three judges awarded Mayweather a unanimous victory, bumping up his undefeated record to 48-0. Fan reaction was generally underwhelming. There was a strong impression among those who paid a lot of money that it was a yawner of a fight. "To watch Floyd Mayweather box is to witness an elaborate exercise in self-preservation," opined Drew Magary from Deadspin. "There’s not much passion. There’s certainly not much flair."

Was the match really dull and boring? Mayweather showed his defensive prowess by constantly running and clinching while Pacquiao had a hard time finding a good angle of attack. Mayweather is taller and has a longer reach, generally staying beyond the range of Pacquiao’s knockout punches, particularly in the first three rounds. However, whenever Pacquiao closed in on Mayweather he landed strong left blows sending the latter reeling. Rounds four and six saw a serious left-handed assault by Pacquiao, while Mayweather's reactions seem to be slowing. Pacquiao lands more left jabs and swings amidst the crowd chanting “Manny! Manny!” in rounds seven and eight, but Mayweather has a beautiful defense and great left hooks. For the ninth round, Pacquiao lands a leaping overhand left and is very much the aggressor. Mayweather kept landing single shots. By round ten, Pacquiao is still aggressively attacking, but Mayweather is not swinging much and seems content to simply win on points. Mayweather won the last two rounds with his brilliant defense and strong counterpunches.

Neither Mayweather nor Pacquiao tried to land knockout blows as they employed a defensive strategy aimed to wear down their opponent. Not the makings of an exciting match. As soon as the public learned of Pacquiao’s shoulder injury it affirmed their impression that he was fighting one-armed.

District Court – The Fighters Seek a Joint First Round Knockout

Time to get legal.

On the opening bell of any lawsuit defendants seek an early knockout, if possible, based on the content of the complaint. For instance, if a plaintiff files a lawsuit in federal about an incident long ago, and after the statute of limitations had tolled, the defendant would file a Motion to Dismiss pursuant to Federal Rule of Civil Procedure (FRCP) 12(b)(6) asserting plaintiff failed to state a claim upon which relief can be granted. (Many state courts call the motion a Demurrer).

Most 12(b)(6) cases are not that easy, and usually revolve around fine points of law, seeking a well shot bullet of sorts, to obtain a first-round victory.

Defendants argued the class action plaintiffs alleged a “a unified course of fraudulent conduct and relies entirely on that course of conduct as the basis of that claim…the claim is said to be ‘grounded in fraud’ or to ‘sound in fraud,’ and the pleading…as a whole must satisfy the particularity requirement of Rule 9(b)”. In most federal lawsuits only general facts are necessary to place a defendant on notice why they are being sued. But fraud is obviously a bigger deal. Specifics of the who, what, when where and how are required. And the ‘Fight of the Century’ defendants also moved to dismiss the entire class action applying this heightened pleading standard.

Even though these cases are class actions all the same rules of federal procedure apply.

District Court Ruling – Consumers Knocked Out in the First Round

The trial court did not take kindly to the disgruntled fans’ complaints noting a “judicial reticence to recognize disappointed-fan injuries” in consumer protection cases, explaining it must first seek the threshold determination plaintiffs had legally protected right or interest before allowing the case to proceed. While the trial court appreciated no existing case law applied to the precise issues in this case it ultimately decided to rely on defendants’ arguments that the ‘License Approach’, defined as a sporting event ticket providing the purchaser “nothing more than a revocable license” to view the event.

The district court held that that a misrepresentation or omission implicating the core of athletic competition relating to competitive strategy, or the quality or outcome of competitive performance, cannot create a cognizable injury of a legally protected interest under the license approach. The district court did not accept plaintiffs’ argument that the case of a garden variety fraud as hiding Pacquiao’s injury only related to ‘competitive strategy’ implicating the core of athletic competition, and not business decision.

The trial court dismissed all the Multidistrict Litigation cases in one fell swoop. A knockout in the first round. Millions of consumers laying cold on the courtroom canvas.