The putative class action plaintiffs, the fans, ticket holders, come out swinging. ‘No’, they exclaim, this is a classic case of fraudulently inducing consumers to purchase PPV and tickets to the fight under false pretenses by concealing material facts, a serious injury existing before the fight, before any sales of PPV and to the fight arena. Before the contracts were even signed. Those disclosures certainly would have disrupted PPV and ticket sales, a circumstance unfavorable to all defendants. It was hidden from the consumers.
By Simpluris Research Team - 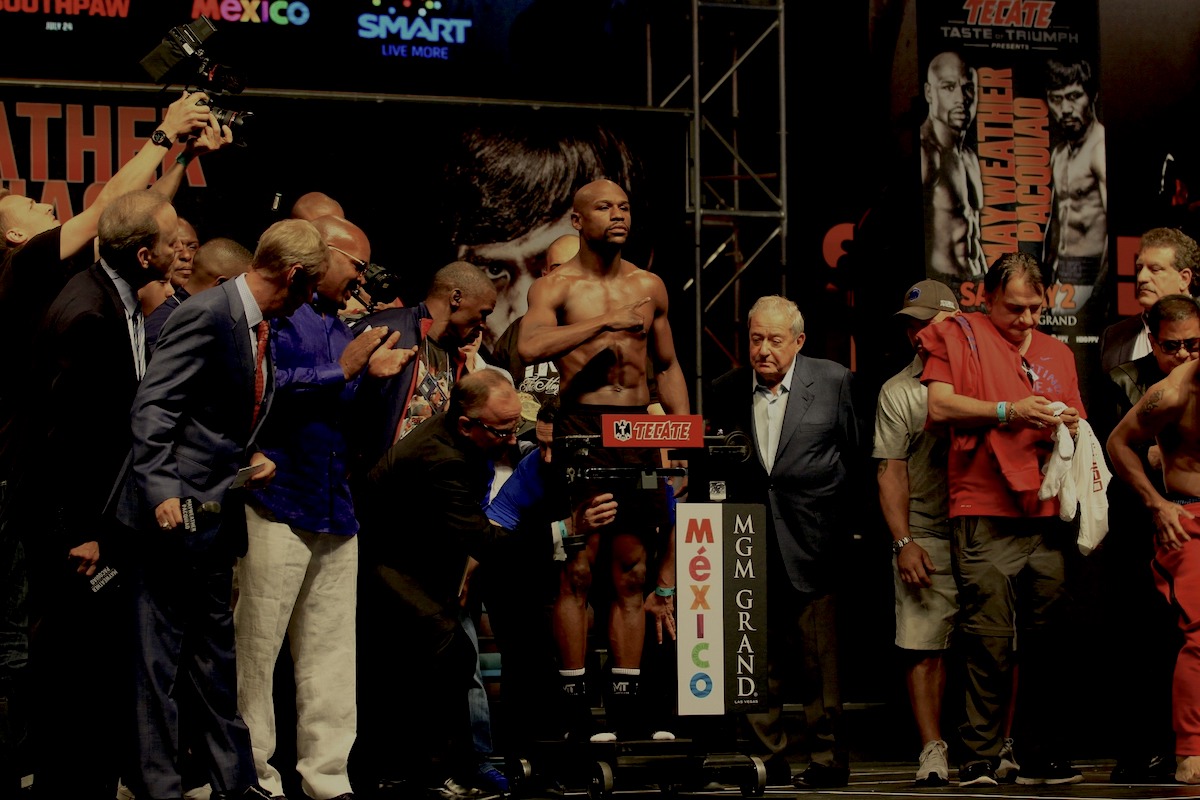 The Rematch – The Ninth Circuit Court of Appeals

The putative class action plaintiffs, the fans, ticket holders, come out swinging. ‘No’, they exclaim, this is a classic case of fraudulently inducing consumers to purchase PPV and tickets to the fight under false pretenses by concealing material facts, a serious injury existing before the fight, before any sales of PPV and to the fight arena. Before the contracts were even signed. Those disclosures certainly would have disrupted PPV and ticket sales, a circumstance unfavorable to all defendants. It was hidden from the consumers.

Plaintiffs argue the ‘license approach’ is inapplicable to the ‘Fight of the Century’. The Complaints all allege that defendant intentionally concealed material facts about Pacquiao’s injury unrelated to any athletic strategy but only for financial reasons – to generate unprecedented PPV sales for a big payday --- regardless of the outcome of the event. And, as to the promoters, defendants could not have concealed facts in furtherance of any athletic strategy because they were not involved in devising any athletic strategy, only sales. The ‘Fight of the Century’ case is no different than other claims alleging fraudulent inducement to procure sales of any other goods or service previously been upheld by Ninth Circuit, and whether a business practice is deceptive is a question of fact inappropriate for dismissal under a FRCP 12(b)(6) motion.

The Pacquiao/HBO camp argued ‘you can’t sue over a not so exciting fight’. But plaintiffs got what they paid for – a fight between Pacquaio and Mayweather. There was no representation the boxers were injury free. Everyone got what they paid for. Defendants cite a long list of precedent from other sports to support their position. An interesting survey follows:

Boxing. In the wacky world of boxing Mike Tyson once pre-planned a scheme to bite off his opponent’s ear to become disqualified instead of losing the fight and having a career ending defeat. He even went into the round without his mouth guard to insure he could take a bite. But the New York Appeal court, in Castillo v. Tyson, ruled that “received what they paid for, namely, the right to view whatever event transpired.”

Football. It was alleged that the New England Patriot secretly taped the New York Jets play calling signals. (No deflated balls were implicated in this scheme). In Mayer v. Belichick, fans sought consumer fraud damages because the game was not played “fairly” and “honestly” because the Patriots had secretly taped the Jets’ signals. The Third Circuit Court of Appeal said ‘no’ --- ticket holders bought a ticket to see a National Football League game, and they saw one. The court was unimpressed regarding the ‘secret taping’ allegations.

Formula One Racing. Twenty cars were scheduled to race. But then a flaw in the tires of fourteen contestants was discovered rendering them dangerous for use at full speed on one part of the track. Only six cars raced instead of twenty. Too bad, said the Seventh Circuit in Bowers v. Fédération Int’l de l’Automobile. They bought tickets for a race and saw a race.

So, from these cases defendants argued they saw Pacquiao and Mayweather fight a full 12 full rounds. Also, the NSAC learned of Pacquiao’s injury three hours before the big fight. He was examined, cleared to box. How can there be a dispute when the state’s regulatory body approved the fight before the starting bell. Additionally, if Pacquiao health information was revealed it would provide Mayweather with an unfair competitive advantage.

The Mayweather Defendants argued that to allow Plaintiffs to proceed with their lawsuit would ‘open the floodgate’ to numerous other lawsuits by unhappy sports fans. And since Plaintiffs allegations against these defendants stem from allegations of a “mole” in the Pacquiao camp and knew “everything” that was going on there would create precedent requiring competitors to disclose their opponents medical information of their opponents which is at best secondhand knowledge. ‘Sports-strategy’ decisions must be beyond the reach of U.S. courts. If athletes, teams, etc. were required to provide disclosure of opponents’ physical frailties they would lose a competitive advantage for their planned exploitation.

Consumers Strike Back – Plaintiffs Come Out Swinging In The Late Rounds

Plaintiffs argued that each case involved claims alleging that the defendants “knowingly suppressed [facts] to consumers before sales were made” and that plaintiffs would not have bought their tickets had they been informed of the undisclosed facts.

Boxing consumers punch back. No, they say, they are unconcerned about the rules governing sporting events, or litigating them. But in any consumer transaction they should been informed that prior to buying extremely expensive PPV or tickets for the fight they should have been advised the underdog suffered a severe shoulder injury, interrupted his training, and that it was highly likely the bout would be a complete dud that any reasonable consumer would not pay record prices. Standard consumer law, plaintiffs argue: The sellers had exclusive knowledge of material facts unknown to consumers; they actively concealed these critical facts  from consumers; and made partial representations but also suppress some material facts, leaving consumers with incomplete knowledge. Plaintiffs argue, there is no exception to consumer fraud rules regarding the tickets for an event than any other product or service.

If winning the fight was important to the Pacquiao Defendants they could have, would have, should have, simply postponed the bout until after he received shoulder surgery and his substantial handicap was eliminated. Instead, Pacquiao went forward claiming he didn’t want to disappoint his fans, also not an athletic strategy. Indeed, the promoters have no athletic ‘strategies.’ They are only in the game to promote the fight and receive the reward the gate provides.

Plaintiffs contest that the NSAC only reluctantly allowing the match to proceed after learning of Pacquiao’s injury, but when fans had already entered the arena and gathered at homes, bars and other PPV parties

LA Rams In 1994 the LA Rams football team sold season tickets that included an important right to renew or upgrade these tickets the following year. However, the Rams did not inform its fans that the 1995 season renewal or upgrade was meaningless because the team was planning to move to St. Louis. In Charpentier v. Los Angeles Rams Football Company, Inc. the California Court of Appeals ruled that a jury could reasonably find team sold more season tickets in 1994 because fans would not have elected to commit dollars ‘waiting until next year’ (as any then fan would know that the 1994 Rams were not a good team ) when the team would be half a continent away. The Charpentier court offered an example that if a team falsely announced the signing of a star player to increase tickets sales. Plaintiff argued the unique setting of a historic one-on-one boxing match billed as the “Fight of the Century” between two stunningly famous boxers is akin to sales regarding the entire team, as opposed to some of its players

Plaintiffs argued to the Ninth Circuit that it is a question of material fact whether under these facts was concealing the injury a business decision or one of athletic strategy.

Mick Jagger Plaintiffs also invoked the spirit of the Rolling Stones Mick Jagger. In Druyan v. Jagger the Southern District of New York found for plaintiffs who travelled to Atlantic City and incurred food, travel and hotel costs when Ticketmaster and Jagger intentionally withheld timely notice of Mick’s throat injury. In Druyan the court found that those holding themselves out as public figures have no right to privacy or otherwise regarding matters, they engage in publicly for renumeration.

The Ninth Circuit has heard oral argument and a decision is expected in the first half of 2020.

Pacquiao has long been dubbed as the ‘Nation’s Fist’ in the Philippines. He has transformed his fame into political victories, first as congressman starting in 2010 and is now one of 24 senators, all while capturing and defending his WBA Super World. He is rumored to desire run for President of the Philippines in 2022.

Mayweather is now comfortably retired from boxing, living the high life, including purchasing has a $25 million mansion in Los Angeles. His charity foundation is very active helping underprivileged youth in Los Angeles. And he is quite generous, donating $200 million to Hurricane Harvey victims last 2017.

Mick Jagger, underwent heart surgery at the age of 76 but didn’t miss a beat, still touring and no retirement plans of stopping touring or retiring soon. Fans pay up to $500 a ticket for Rolling Stones concerts. So why some fight fans may sing ‘I can’t get no satisfaction’, our fighters would respond ‘you can’t always get what you want.’